As the most important crop of Mexico, winter wheat sowing began in October. Both soybean and rice were at harvesting stage over the reporting period. Maize was at growing stage in November and December and reached harvest in January in the northwest. In other areas of the country, maize was at the harvesting stage from October to December.

Crop condition was close to average between October to January according to the crop condition development graph based on NDVI. The CropWatch agroclimatic indicators show that TEMP (+0.4°C) and RADPAR (-3%) were close to average and RAIN was significantly increased (+62%), which was beneficial for crop growth, as indicated by a relatively high value of VCIx (0.89). CALF decreased by 2% compared with the previous 5-year average. BIOMSS increased by 2% compared to average.

Crop condition displayed obvious differences in spatial distribution. According to the spatial pattern of VCIx, VCIx in the south was higher than that in the North. Very high values (greater than 1.0) occurred mainly in southeastern Mexico (including Veracruz, Tabasco and western Campeche), whereas extremely low values (less than 0.5) occurred in the north-east and middle of the country (northwestern Coahuila, northern Nuevo León and northern Tamaulipas ). The VCIx in other regions of Mexico was moderate, with the values between 0.5 and 1.0. As shown in the spatial NDVI profiles and distribution map, about 42.2% of the total cropped areas were below average during the entire monitoring period, mainly distributed in the northeast of Coahuila, north of Nuevo León and north of Tamaulipas while 54.7% of the total cropped areas, mainly in Sinaloa and Sonora provinces, were just slightly above average.

The Arid and semi-arid regions located in northern and central Mexico account for about half of planted areas in the country. According to the NDVI development graph,crop condition in this region was generally close to average during the reporting period. VCIx was relatively low with a value of 0.80 and CALF decreased by 5% compared with average, RAIN and TEMP increased by 84% and 0.1°C respectively and RADPAR decreased by 4%, which all resulted in an increasement of BIOMSS(+6%).

Sub-humid temperate region with summer rains is situated in central Mexico. According to the NDVI development graph, crop condition was continuously close to average in this region. The agro-climatic condition showed that RAIN and TEMP increased by 114% and 0.5°C respectively and RADPAR decreased by 6% compared to average. BIOMSS also increased by 1% and CALF was 93%. The VCIx(0.93) confirmed favorable crop condition in these regions.

Sub-humid hot tropics with summer rains are located in southern Mexico. During the monitoring period, crop condition was above average since November, as shown by the NDVI time profiles. Agro-climatic conditions showed that RAIN was significantly above average (+64%) while TEMP and RADPAR were near average (+0.5°C and -3%). The VCIx in these areas was 0.95 and BIOMSS was on average, which meant crop grew well.

Humid tropics with summer rainfall are located in southeastern Mexico. RAIN was significantly above average (+30%), TEMP was 0.7℃ warmer and RADPAR up 4%. As shown in the NDVI development graph, crop condition was below average in October and improved to average from November to January. BIOMSS decreased (-3%) and the VCIx (0.97) confirmed favorable crop condition in these regions. 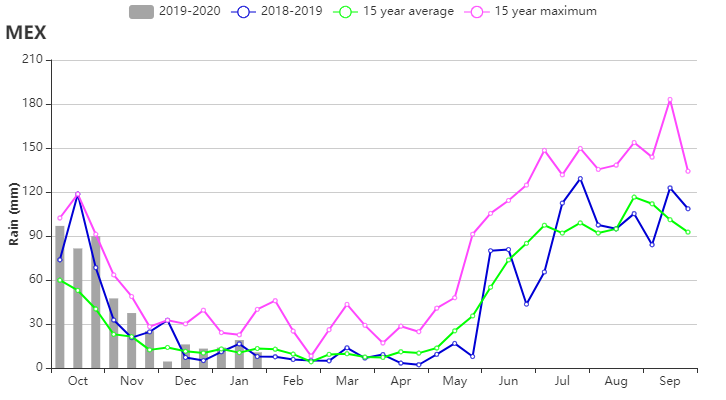 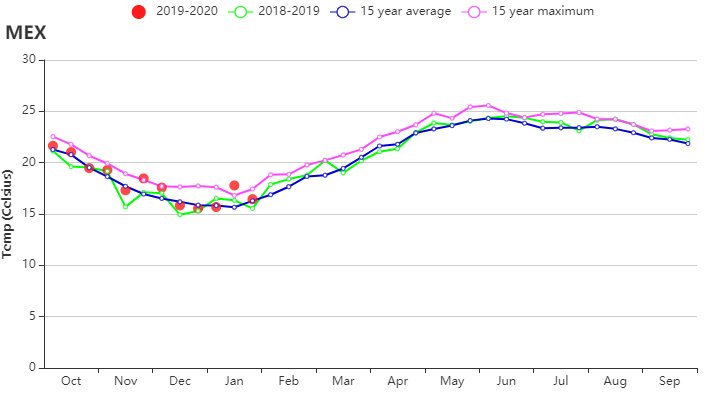 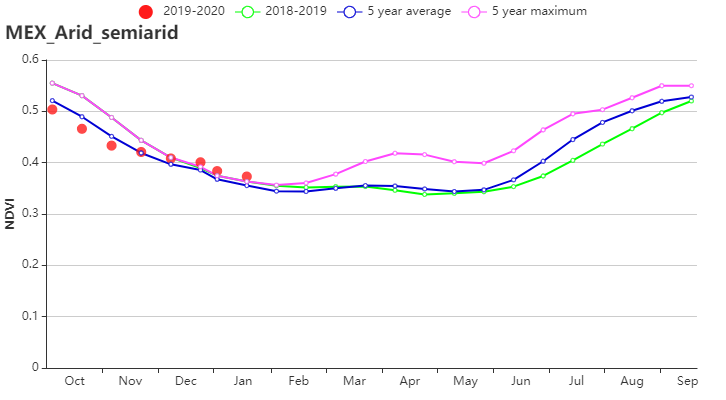 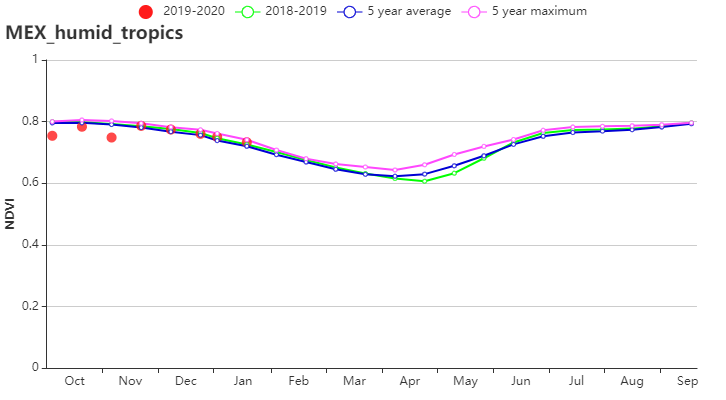 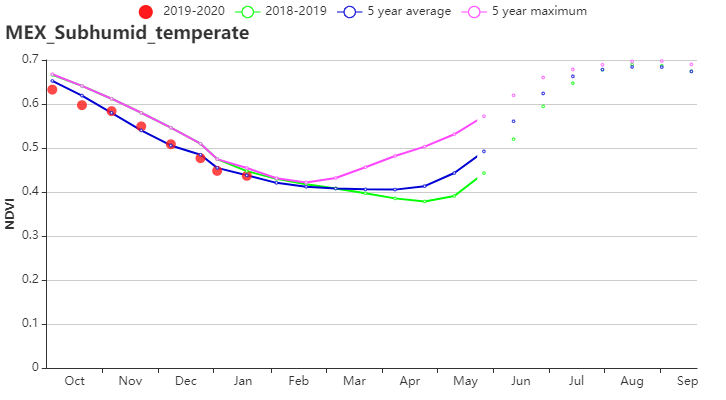 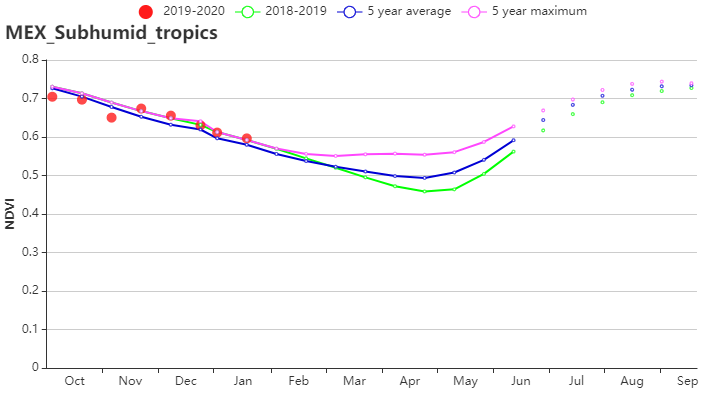