Mongolia only grows summer crops from May to September. The crops are normally harvested in September, but due to cold conditions (lower than 5.0°C) in May of last spring, the sowing and planting were delayed; therefore, harvest of last summer crops took place in October only. TEMP was near the fifteen-year average (+0.4°C) during this reporting season, and it was warmer (+3.0°C) than average at the beginning of November.

Nationwide, according to CropWatch agro-climatic indicators, the weather was humid and slightly cloudier (RAIN up +28% and RADPAR down -1%). The increased precipitation may benefit early sowing, in the primary agriculture regions of Selenge-Onon, Khangai-Khuvsgul, and Central and Eastern Steppe. The agro-climatic condition resulted in an increase in the BIOMSS index by 2% above the five-year average. The abundant rainfall will benefit the planting of spring crops.

The primary crop condition in the Khangai Khuvsgul reegion was higher than the five-year average in mid and late October and lower in November. Accumulated rainfall was above average (RAIN +33%). Compared to the average, TEMP was up by 0.6°C and RADPAR was down by 2%. The BIOMSS index increased by 1% compared to the fifteen-year average in this region.

In the Selenge‐Onon region, RAIN was up by 27%, while TEMP was average, and RADPAR was slightly lower (-2%). The BIOMSS index decreased by 2% of fifteen-year average. The agro-climate condition was almost average.

In the Central and Eastern Steppe Region, the meteorological variables were above average: RAIN +33% and TEMP +0.6°C.  RADPAR increased slightly above average. BIOMSS(+7%) showed an above average potential biomass.

(b) Crop condition development graph based on NDVI 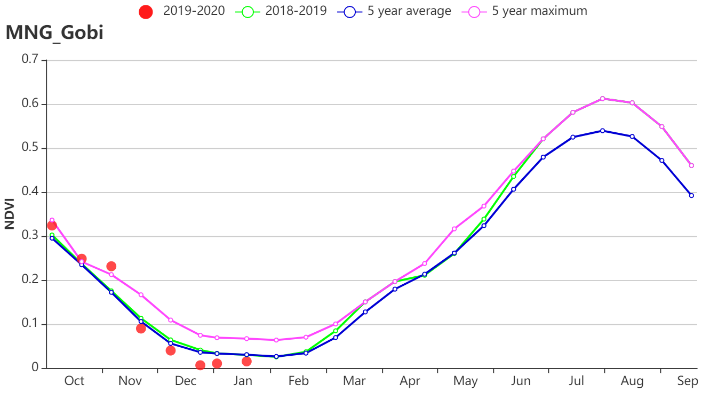 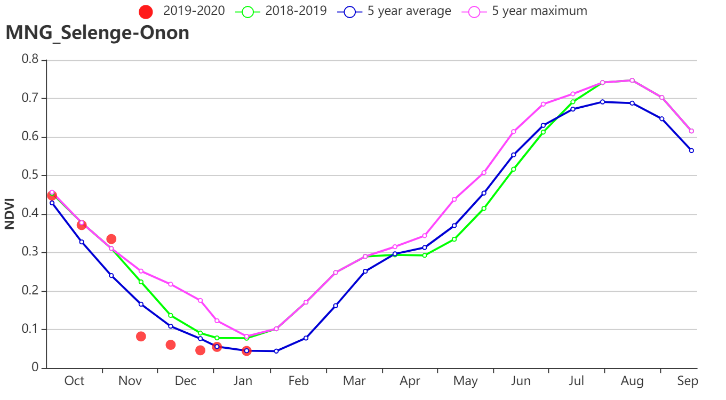