This bulletin describes environmental and crop conditions over the period from July to October 2019, JASO, referred to as “reporting period”. In this chapter, we focus on 65 spatial “Mapping and Reporting Units” (MRU) which cover the globe, but CWAIs are averages of climatic variables over agricultural areas only inside each MRU. For instance, in the “Sahara to Afghan desert” MRU, only the Nile valley and other cropped areas are considered. MRUs are listed in annex C and serve the purpose of identifying global climatic patterns. Refer to Annex A for definitions and to table A.1 for 2019 JASO numeric values of CWAIs by MRU.

Although they are expressed in the same units as the corresponding climatological variables,  CWAIs are spatial averages limited to agricultural land and weighted by the agricultural production potential inside each area.

We also stress that the reference period, referred to as “average” in this bulletin covers the 15 year period from 2004 to 2018. Although departures from the 2004-2018 are not anomalies (which, strictly, refer to a “normal period” of 30 years), we nevertheless use that terminology. The specific reason why CropWatch refers to the most recent 15 years is our focus on agriculture, as already mentioned in the previous paragraph. 15 years is deemed an acceptable compromise between climatological significance and agricultural significance: agriculture responds much faster to persistent climate variability than 30 years, which is a full generation. For “biological” (agronomic) indicators used in subsequent chapters we adopt an even shorter reference period of 5 years (i.e. 2014-2018) but the BIOMSS indicator is nevertheless compared against the longer 15YA (fifteen years average). This makes provision for the fast response of markets to changes in supply but also to the fact that in spite of the long warming trend, some recent years (e.g. 2008 or 2010-13) were below the trend.

Considering the size of the areas covered in this section, even small departures may have dramatic effects on vegetation and agriculture due to the within zone spatial variability of weather.

It is important to note that we have adopted a new calculation procedure of the biomass production potential in the previous (August 2019) bulletin. The new approach includes sunshine (RADPAR) as well next to TEMP and RAIN. Readers are referred to the previous bulletin for details.

The current reporting period experienced yet another absolute global monthly temperature record (October). This followed other monthly records, especially July, the warmest month ever recorded on the planet (see Sources [1] to [5] at the end of the chapter). Considering that September was the second warmest on record, the current JASO was globally warm and dry, and this is confirmed by numerous fires listed in the section on Disasters (Chapter 5.2) on almost all continents. According to the source of data and calculation procedures, the global temperature anomaly for JASO against 2004-2018 reached between -0.1°C and +0.1°C over agricultural areas, thus excluding deserts and boreal areas. 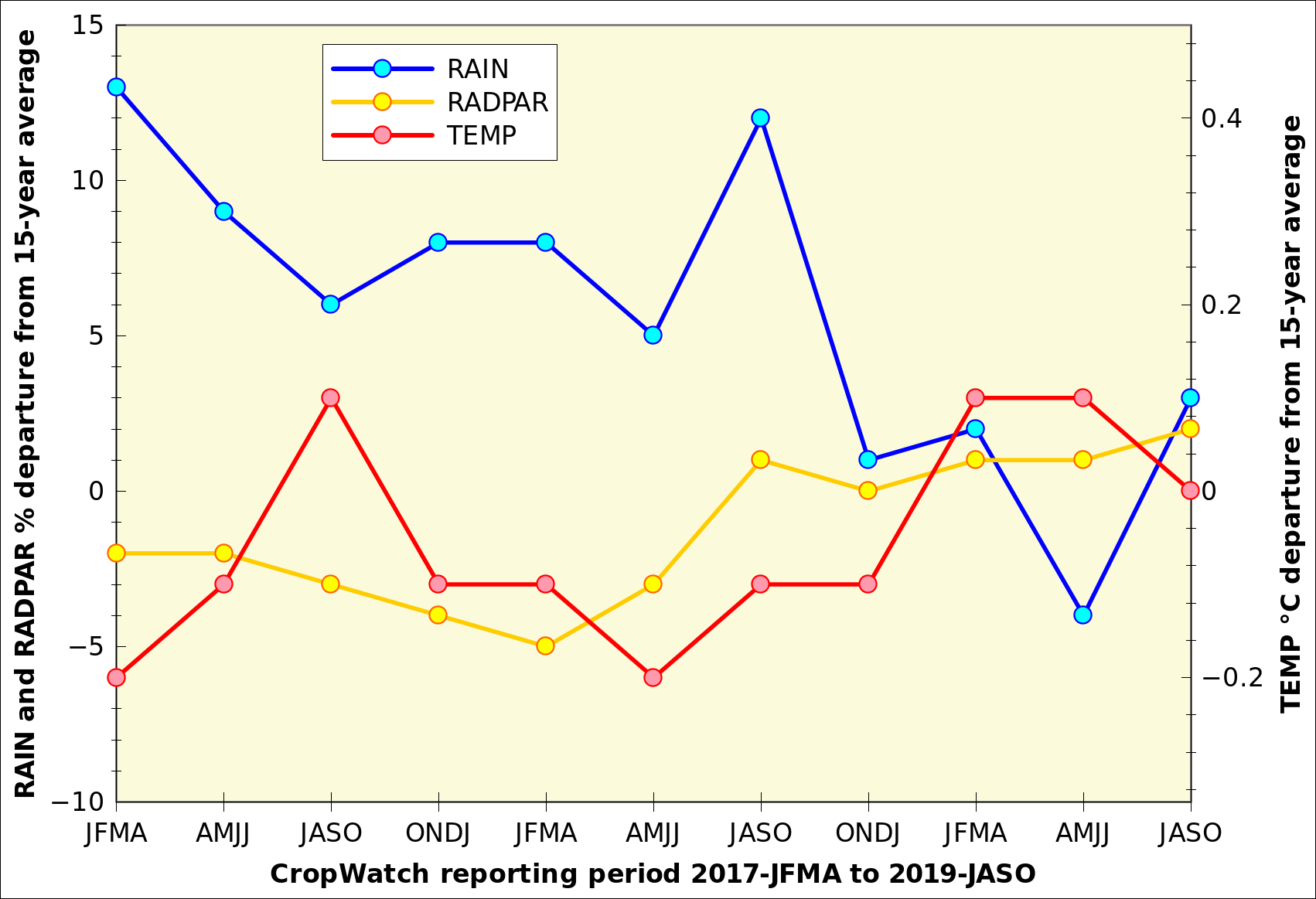 Figure 1.1 shows unweighted averages of the CropWatch Agro-climatic Indicators, i.e. the arithmetic means of all 65 MRUs, which are relatively close to average. CWAIs are computed only over agricultural areas, and they display a relatively average situation, globally (RAIN +3%, TEMP average, RADPAR +2% and BIOMSS +1%, as result of the combined positive departures of RAIN and BIOMSS).

When global MRU average departures are computed using agricultural area as a weighting factor, a positive rainfall departure of 7% is observed (Table 1.1), with average TEMP and BIOMSS but RADPAR up 1.7%.  Because MRUs are large areas, and because sunshine tends to be less variable than rainfall and temperature, the close to 2% departure for RADPAR is rather significant.

Table 1.1: Departures from the recent 15-year average of CropWatch agro-climatic indicators over regional MRU groups. Within each group, averages are weighted by the agricultural area of individual MRUs. “Others” include five non agricultural areas shown in white in the map. They are located mostly at high northern latitudes, and characterized by the largest positive TEMP departure. Some of them experienced unusually intense fires in their recent summer season.

On a continental basis, RAIN anomalies were largest in north America (+24% above average),  central Asia (+22%) and in Oceania (-38%), reinforcing the anomalies that were observed during the previous AMJJ reporting period when the corresponding values were 19%, 20% and -30%. While AMJJ was relatively dry in East Asia (-12%) and in South Asia (-13%) the areas experienced precipitation that was average (+2%) and above average (+11%), respectively, during the current JASO reporting period. Low precipitation in southern and especially central America (-9%) is directly associated with a very tense situation in the “drought corridor” (refer to Chapter 5.2 on Disasters).

In North America, TEMP was 0.4°C below average, with most other areas recording closer to average temperature. Positive anomalies occur in central and eastern Asia (+0.3°C compared with average) where almost all MRUs has consistently warmer than average weather positive over their agricultural areas (89% and 100%, respectively).

RADPAR was generally close to average except in South and Central America (+3%) and Oceania (+6%), where all MRUs were affected.

The largest BIOMSS increase occurred in central Asia (+5%), with large differences between the individual MRUs, as listed below (1.6)

Figure 1.2. Global map of rainfall anomaly (as indicated by the RAIN indicator) by CropWatch Mapping and Reporting Unit: departure of July to October 2019 total from 2004-2018 average (15YA), in percent.

Rainfall deficits occurred mostly in South America, south of and including the Central-northern Andes (MRU21), Central eastern Brazil (MRU23) and the Brazilian Nordeste (MRU22)    , where deficits are just above 10%. Larger deficits in excess of 20% hit the Semi-arid Southern Cone (MRU28) with a 40% shortfall of rain and Western Patagonia (MRU27)    at -25%. The major agricultural area of the Pampas had a deficit of 17%, corresponding to early and mid-season stages of winter crops at a time when summer crop land preparation is just starting.

The second deficit area extends from Australia across maritime south-east Asia to east Asia, with the driest conditions prevailing in Australia at the beginning of spring: Northern Australia (MRU53), -58% precipitation compared with average, Australian desert (MRU63, -52%), Queensland to Victoria (MRU54, -40%) and Nullarbor to Darling (MRU55, -27%).  Precipitation in the southern areas (MRUs 54 and 55) is normally in excess of 200 mm during the reporting period but only 120 mm and 173 mm were recorded, respectively, at the late stages of winter crops.  South-West Australia (MRU55) had one of the largest sunshine anomalies (+10%) globally.

A final dry area extends from the Caucasus (MRU29, -22%) to the northern Mediterranean areas in Turkey and Europe up to Spain (MRU59, -13%).

The largest precipitation excesses extend over a contiguous area extending from Southern Asia to northern Africa, across several climatic zones which were all at or nearing the end of their summer cropping season over the reporting period. They include Southern Asia (MRU45, +47% precipitation compared with average), the Pamir area (MRU30, +50%), Punjab to Gujarat (MRU48, +100%, which represents about 1200 mm of precipitation), Western Asia (MRU31, +34%), the Sahara to Afghan deserts (MRU64, +41%) and the Horn of Africa (MRU04, 67%). In the two last MRUs, expected amounts are small (17 mm and 87 mm, respectively) and the rainfall has created local floods but also  improved the biomass potential, especially in range-lands (+30% and +1%).

Slightly lower precipitation was recorded over the eastern-central parts of Asia with excesses in the range from 31% to 36%) in Southern Mongolia (MRU47), Eastern Central Asia (MRU52) and Northeast China (MRU38).

Very wet conditions prevailed over north America, with the largest late summer crop season excesses reported from the Sierra Madre (MRU17, +35%) and especially the Northern Great Plains (MRU12) which recorded 409 mm when 257 mm were expected, a positive departure of 59%. The area also experienced rather cool weather 1.4 below average low sunshine (-3%).

Figure 1.3. Global map of temperature anomaly (as indicated by the TEMP indicator) by CropWatch Mapping and Reporting Unit: departure of July to October 2019 average from 2004-2018 average (15YA), in °C .

Negative temperature of -1.0°C or larger occurred in Sub-boreal America (MRU15, 1.0°C below average). The area (Canada) is of limited agricultural importance for crop agriculture, contrary to British Columbia to Colorado (MRU11; -1.4°C) and especially the Northern Great Plains (MRU12, -1.4°C), which also experienced cool and wet weather. The West Coast MRU16, which includes most of California suffered more from drought (RAIN -6%) than from high temperature.

Figure 1.4. Global map of photosynthetically active radiation anomaly (as indicated by the RADPAR indicator) by CropWatch Mapping and Reporting Unit: departure of July to October 2019 total from 2004-2018 average (15YA), in percent.

The already mentioned MRU15 (Sub-boreal America, RADPAR down 3% below average) was one of two low sunshine areas in northern America, the other being the Northern Great Plains (MRU12) with the same -3% deficit.

Remaining low solar radiation areas all occur in the south and east of Asia. They include the two adjacent areas of Southern Asia (MRU45, essentially India) with a spectacular 9% drop in sunshine compared with average and Punjab to Gujarat (MRU48) where the drop reaches 5%. All the listed areas in America and Asia had above-average rainfall and low temperature. In Southern Japan and the southern fringe of the Korea peninsula (MRU46), the shortage of sunshine reached 3% with excess precipitation, but temperature was close to average. All the listed areas also have negative biomass production potentials, except in  Punjab to Gujarat where the very large excess in precipitation (+100%) combined with reduced evaporation associated with low temperature and sunshine led to a biomass potential increase of 21%.

Large positive sunshine departures in excess of 5% occurred in thirteen MRUs on all continents. In America, with the exception of Sub-boreal America and the Northern Great Plains, the whole continent has above-average sunshine, with the largest values in Northern South and Central America (MRU19, +5%) and the Caribbean (MRU20, +6%) and, at the southern end of the continent, Western Patagonia (MRU27) with a 5% positive departure.

In Southern Africa (MRU09) the excess was 4% on average, with the Mediterranean area of the Western Cape (MRU10) having recorded 5%.

In eastern and south-eastern Asia the largest positive departures correspond to Maritime Southeast Asia (MRU49) and the Lower Yangtze (+8%), followed by Southern China (MRU40) and Hainan  (MRU33) at 6% and Mainland Southeast Asia (MRU50) at +5%.

The largest departures occur in Australia with Nullarbor to Darling (MRU55) at +10%,  the central Australian desert areas  (MRU63) with Queensland to Victoria (MRU54)    at +6% and Northern Australia (MRU53) at +5%

Figure 1.5. Global map of biomass production potential  anomaly (as indicated by the BIOMSS indicator) by CropWatch Mapping and Reporting Unit: departure of July to October 2019 total from 2004-2018 average (15YA), in percent.

Large negative BIOMSS anomalies are widely dispersed among the continents.  The largest potential biomass production deficit was recorded over Northern Australia (MRU53)    at -20%, mostly in a grass and shrub-land area that plays a minor role for crop production, but includes some of the main livestock producing areas in the country. We next need to mention three adjacent south American MRUs, covering a large diversity of environmental conditions: the Central-northern Andes (MRU21, 14% below average), the Semi-arid Southern Cone (MRU28) and Central-north Argentina (MRU25), both at -11%. The first includes high elevation areas but practices irrigation in the coastal lowlands. All are relatively minor crop production areas but play a significant role in livestock production, and it is thus likely that range-lands and grasslands have suffered in the area.

Finally, two unrelated areas in Europe and in Africa: Ukraine to Ural mountains (MRU58) with a 13 % drop in biomass production potential and the East African highlands (MRU02) at -11%. Ukraine experienced average rainfall but low temperature and sunshine. In MRU02, rainfall was abundant (+11%) but temperature was below average.

If Boreal America (MRU61) and Sub-arctic America (MRU65) are excluded, positive BIOMSS anomalies larger than 20% occurred in Punjab to Gujarat (MRU48, +21%) and in the Sahara to Afghan deserts (MRU64, +30%). While the second is not relevant due to normally extremely low rainfall (the MRU recorded 25 mm instead of 18!) the doubling of precipitation in MRU48 (1203 mm instead of 601 mm) is very significant in spite of low temperature and sunshine. As detailed in the section on Disasters (5.2) parts of the area suffered bad floods, but the abundant rainfall has nevertheless benefited summer crops and grazing lands.