The monitoring period covers the growth of spring wheat up to July and the harvest in August and September. Only one crop is grown (CI is 100%). There have no crops in October in Kazakhstan, except for winter rye. The national average VCIx was 0.76 and the Cropped Arable Land Fraction decreased by 8% compared to the five-year average.  Among the Crop Watch agro-climatic indicators, RAIN and RADPAR were above average (+11% and +1%) at the national scale. However, rainfall dropped well below average and last year's in July and August. Furthermore, TEMP was also slightly above average (0.3°C) during the monitoring period. Especially in July temperature was close to the fifteen-year maximum. The combination of the factors resulted in high BIOMSS (+4%) compared to the fifteen-year average. As shown by the NDVI development graph, crop condition was generally below the five-average in the whole monitoring period, except during October. High temperature and low precipitation between July and August, have negatively affected spring wheat yields. NDVI cluster graphs and profiles show that 22.5% (July to late August) of the cropped areas was above average in northern part of Oral, some parts of East Kazakhstan, Semey, Shymkent and Kzyl-orda provinces and small parts of North Kazakhstan, Karaganda, Pavlodar, Kokshetau, Karanganda, Taldy Kurgan, Almaty and Taraz provinces. 77.5% of the cropped areas was below average in other provinces from July to late August. Overall, crop condition and output were unfavorable in the reporting period.

In the  Northern region, crop condition was lower than the five-year average from July to September and close to the average in October. RAIN was above average (12%)., together with  TEMP and RADPAR (+0.2°C and +1%, respectively). BIOMSS was up 1% but cropped arable land fraction fell 12%. The maximum VCI index was 0.72 in this region. Overall, the outcome of the crop deemed to be unfavorable.

The Eastern plateau and southeastern region had below average NDVI in July and October and close to 5YA conditions in August and September. RAIN, TEMP and RADPAR were above average (12%, 0.2°C and 1%, respectively). The resulting BIOMSS variation was +7%. The maximum VCI index was 0.88 and cropped arable land fraction increased by 3%. Overall crop prospects are normal.

Crop condition for the South region was close to the average and slightly higher than the five-year average. RAIN was down  (-14%) and TEMP and RADPAR were above their average by 0.2°C and 1%, respectively. Both the  BIOMSS index and cropped arable land increased by 15%. The maximum VCI index was 0.87. Overall crop condition was favorable. 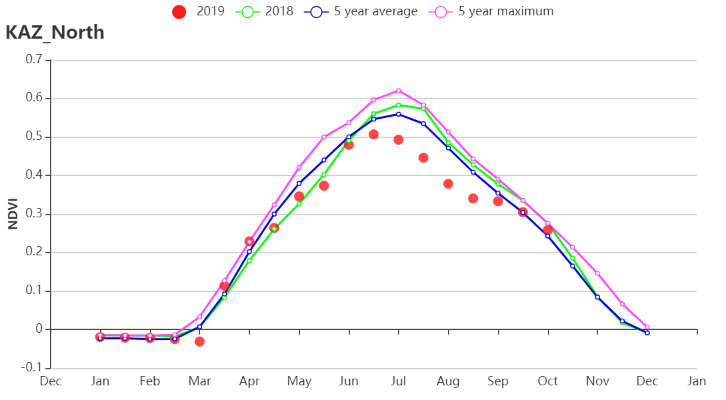 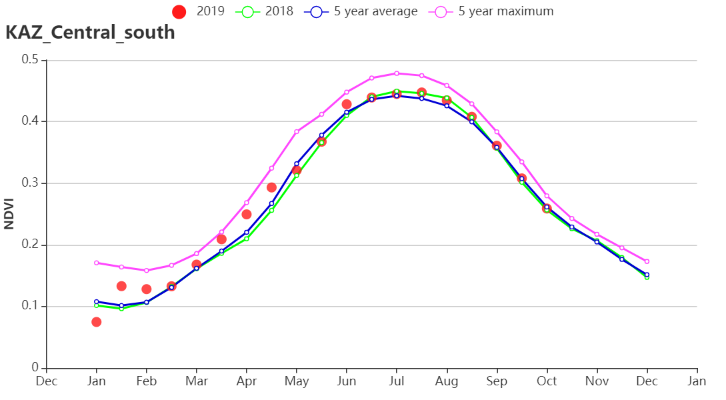 (i) Crop condition development graph based on NDVI (South region) 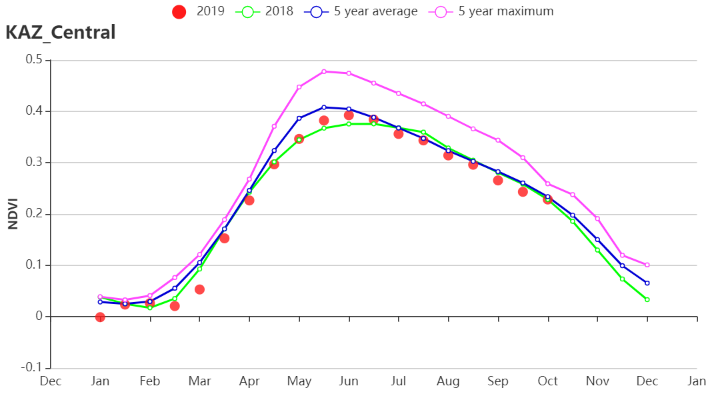