The monitoring period covers the whole growing and harvesting season of maize in Cambodia; it was also the sowing period for the wet season rice.  Nationwide Cambodia suffered a deficit in rainfall (RAIN, 1181 mm, -8%), but temperature (TEMP, 25.4℃, +0.0℃) and radiation (1115 MJ/m2, +3%) were close to average. According to the rainfall profiles, rain was short mainly  in early and mid July, but quickly recovered to normal in August. In addition, agronomic indicators show a favorable crop situation, with nearly all arable land cropped (CALF 0.97), maximum vegetation condition index (VCIx) at 0.93 and stable potential biomass  (BIOMSS, 750 gDM/m2, +3%) under single and double cropping (CI, 121%).

National NDVI data show that crop condition gradually recovered to 5 year average after the sudden decrease in July (probably caused by low rainfall); VCIx was above 0.8 in most areas. According to spatial NDVI patterns, the NDVI in 41% of cropped areas was consistently close to 5 year average, with 11% of arable land always above the average. 25% of cropland, concentrated in the south-western hilly region and the northern plain was influenced by the July rain deficit. Eventually, about 90% of agricultural areas was close or above the average at the end of monitoring period.

Generally, seasonal rainfall deficiency did not impact the overall crop development, and the production of Cambodia can be expected to be fair.

Based on climate differences and topography four agro-ecological regions (AEZs) can be distinguished for Cambodia, the Tonle-Sap lake area where the seasonally inundated freshwater lake and especially temperature are influenced by the lake itself, the Mekong valley between Tonle-sap and Vietnam border and Northern plain and north-east covers agriculturally important regions East of the Lake, and the South-western Hilly region along the Gulf of Thailand coast.

Remaining areas (Mekong valley between Tonle-sap and Vietnam border,  Northern plain and north-east and  South-western Hilly region) experienced similar patterns of agro-climate and agronomic indicators: a rainfall deficit of 4% to 14%, average temperature (TEMP, -0.2 to +0.2℃) and radiation (RADPAR, +3 to +5%), stable high CALF and VCIx and similar cropping intensities (123% to 146%). NDVI development curves were similar, falling in late July and reverting to average in September. With the potential biomass would up by 3% to 4%, the overall situation was favorable for crops. 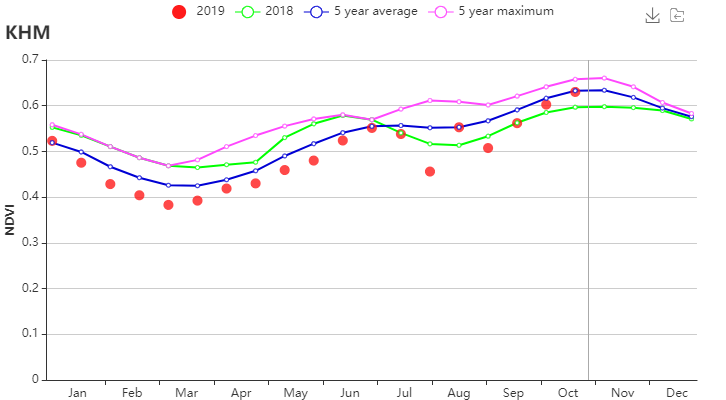 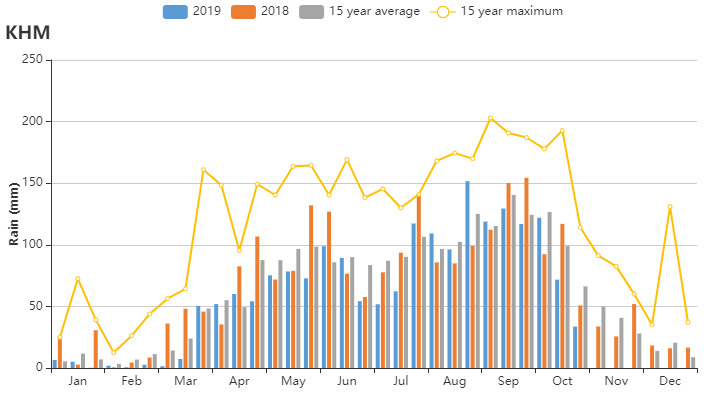 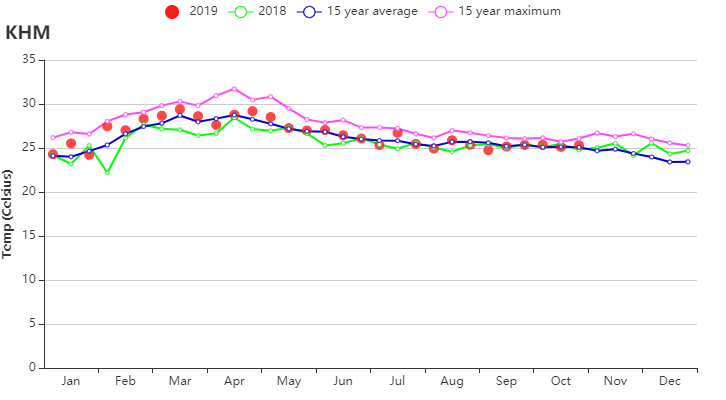