The reporting period covers the harvesting of wheat, the main growing season of maize and rice, as well as the sowing for early and late soybean (Figure 3.7.a). For the whole country rainfall showed a positive anomaly of 15%. Temperature was 0.5°C below average and RADPAR fell 2%. BIOMSS showed a decrease of 1% compared to average. Overall, crop conditions were  favorable during the monitoring period.

From the graph of Argentina NDVI development (Figure 3.7.b), the values of the earlier period (October-November 2019) were close to the average of previous years, while they were significantly lower than the 15-year average in the later period (December 2019 - February 2020).

During the monitoring period, the rainfall of Argentina's four main agro-ecological zones was above average: Chaco (+ 17%), Mesopotamia (+ 2%), Humid Pampas (+ 12%), and Subtropical highlands (+ 36%) . However, both TEMP and PADPAR were lower than the 15-year average. Only Humid Pampas had increased BIOMSS by 1%, while Chaco (-2%), Mesopotamia (-4%), and Subtropical highlands (-10%) all decreased. Compare with the average of previous years, the CALF of Chaco (+ 6%) and Humid Pampas (+ 2%) increased. Only Subtropical highlands (-1%) decreased relative to the average. The VCIx in general showed good crop condition, with VCIx values of the four agro-ecological zones greater than 0.8.

BIOMSS increased in the Humid Pampas due to the previous abundant rainfall, and CALF increased by 2%, potentially favorabl for wheat production. The decrease in temperature and sunshine in Chaco, Mesopotamia, and Subtropical highlands was not compensated for by the increase of rainfall, resulting in a decrease in BIOMSS. For Chaco, CALF had increased by 6%. Therefore, we conclude that the wheat production for the Chaco region was fair, while crop production in Mesopotamia and Subtropical highlands might decrease.

In general, although wheat production in the Mesopotamia and Subtropical highlands had decreased in the earlier period, crop production had increased in Humid Pampas which accounts for most of the crop area. Therefore, the wheat production in Argentina was better than the corresponding period of previous years. However, growth of summer crops during December and January was sub-par.

a. Phenology of major crops

d. Spatial patterns of NDVI departure compared to 5YA.

i. Crop condition development graph based on NDVI (Humid Pampas) 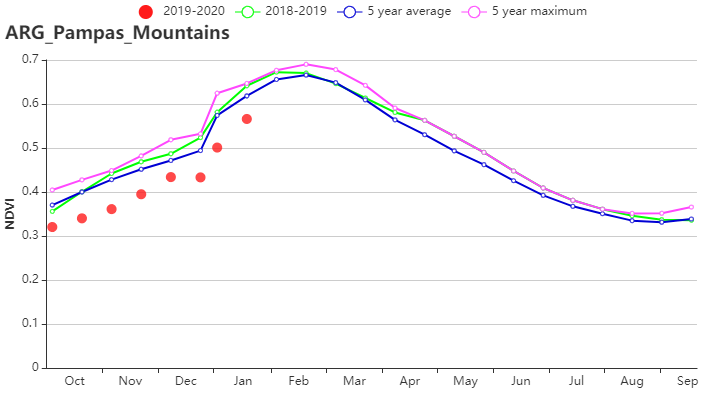 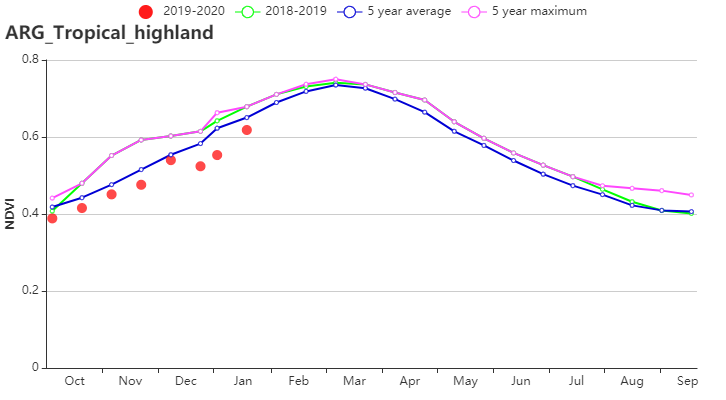